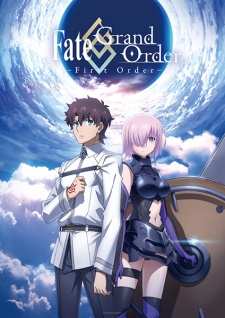 Plot Summary: The story is set in the year 2015, during the final era over which magic still held a strong influence. The humanity survival and security organization Chaldea was established to observe the world that can only be seen by magic and the world that can only be measured by science; as well as to prevent the final extinction of humanity. Thanks to the efforts of many researchers, the path of human history has been ensured for 100 years into the future. However, without warning, the realm of the future that was under constant observation by Chaldea vanished. The extinction of humanity in 2017 was observed—no, confirmed. The apparent cause of the extinction was in the Japanese city of Fuyuki in 2004. In that city, there was an "unobservable realm" which had never existed until now. Chaldea issued the Grand Order for a "Holy Grail Expedition," to investigate, uncover, and possibly destroy the singularity that apparently will cause the extinction of humanity. (Source: ANN, edited)