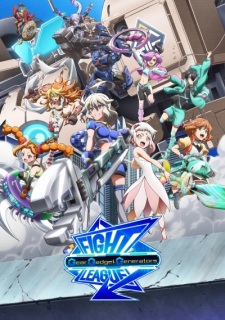 Plot Summary: Fight League is a cellphone game from XFLAG that released last June, and the system was updated one year later this June. It is available in Japan, Korea, Taiwan, Hong Kong, Macao, and Canada. It is a strategic game that is like board game or card game, which can attack using the arrow or create chain with the ally. There are five brands of fighters, and the anime will be focusing on GGG, a.k.a Gear Gadge Generation, which using Gadget fight.